Where should you use Behaviour Driven Development, BDD?

When I was at the European Testing Conference 2016 in Bucharest, a colleague asked me about my thoughts on how they should use Behaviour Driven Development, BDD. I didn't get a good chance to elaborate on my view so I decided that I should write this instead.

My first thought, before I heard how that team is using BDD today, was that as long as they have conversations and use BDD as a framework for understanding each other they are probably fine. But as always, the question was more complicated than that. The team my colleague leads is already using BDD as a communication tool. They specify what the application should do using conversations and write Gherkin to capture the conversations. Writing Gherkin is not the most important part here. The most important part is to have conversations to create a common understanding.

It turned out that the actual question was about for which parts of the system I think it would be a good idea to implement automation using BDD and for which parts they should use unit tests to verify basic correctness. My default answer "Everywhere!" obviously wasn't not good enough. It is especially useless as an advice to someone who currently is learning and building experience using BDD.

A better answer would be nice. An answer that describes why I think that BDD should be used in many more places than for testing an application through the user interface. 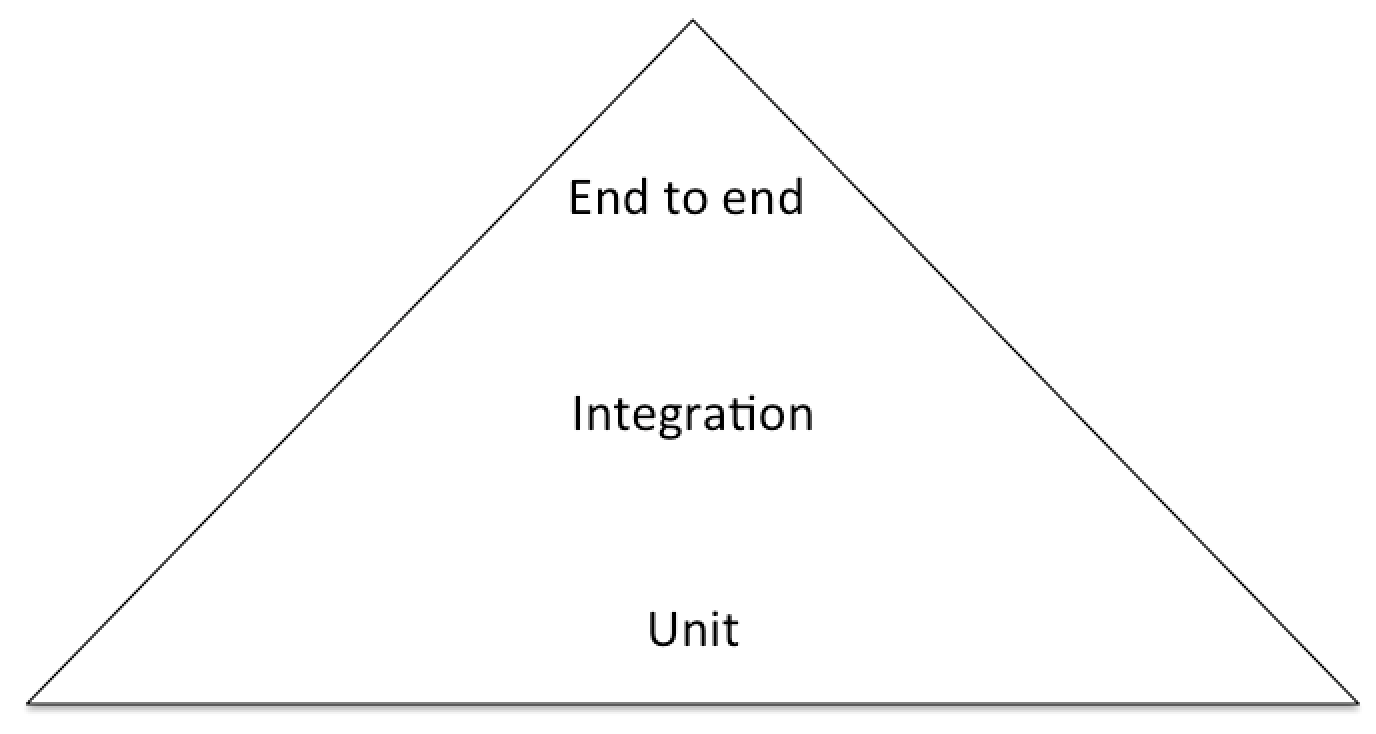 Let me start with a reasoning around the agile testing pyramid. You may be familiar with it, but I need it to define my vocabulary.

The agile testing pyramid tries to show you the number of tests that are appropriate at different levels. That is, the proportion between end-to-end, integrated and unit tests you want to aim for. As you see, there are no numbers defined. Instead, relate to the width of the pyramid. You want fewer end-to-end tests than integration tests and most unit tests.

What is an end-to-end test?

An end-to-end test is a test that checks your entire application. That is, it uses the same user interface as the users and verifies that something actually works. This includes saving things in the database.

Some people think that this is the only realistic way to test an application. They are wrong, most of the verification can be done using other seams of your application.

Given these properties, we would like to have a few end-to-end tests that verifies the most important parts and verify the rest of the application from other starting points.

What is an integration test?

An integration test is a test that checks a large part of application stack. It probably doesn't use the user interface. It may use logic just below the user interface to verify a wanted behaviour. This can include saving data in the database.

Integration tests are also used to verify that the application can connect to things out of your control, provided by someone else. This could include a database, a web service or similar.

These properties indicate that we would like to have a some integration tests. But no more than we have a good use for. They are usually not stable or clear enough to give you good feedback on why something broke.

What is a unit test?

A unit test will check small parts of your application. These are the small parts that makes up the larger components that you need later. It is common that a unit test checks one method.

Unit tests are fast and only have one reason to fail. We would therefore like to have lots of them.

Where should a BDD implementation be used then?

In my opinion, BDD should be used for verifying the most important parts of the application using end-to-end tests. That probably includes starting the application and test it with Selenium or similar.

BDD should also be used to verify the wanted behaviour using integration tests.

These areas must be described in such a way that someone who knows the business and purpose of the application can validate them.

There are times when I think it could be valuable to implement BDD with Cucumber for testing units as well. But that has to be units that effects the application in such a way that the business stakeholder can understand that the functionality has the expected behaviour. An example could be a specific algorithm that decides to sell stock or not given a well known input.

A unit test that is implemented using JUnit or similar should still strive for verifying the behaviour. They should not be aware of the actual implementation. If they are to tightly coupled to the implementation, they will be a hinder when you need to do refactorings. That is not something you want. These unit tests will not be validated by a stakeholder. They are written using a programming language and an assumption here is that the stakeholders don't read code. If they did we wouldn't need tools like Cucumber.

The more balanced answer would therefore be "In all the places where the business stakeholder has any reasons to have opinions about the behaviour."

This implies all parts of the agile testing pyramid. Possibly with different proportions. That is, some test implemented using BDD as end-to-end tests. Many implemented as integration tests and some that verifies small units.

These are arguments for testing as little as possible through the UI. Preferably nothing. Or only so much that you know that the system is properly wired and starts.

Cucumber is not slow. Starting a browser is slow. Starting and stopping your application is slow. This is mitigated the more you test at the bottom of the agile testing pyramid. Find a balance where BDD and Cucumber support you rather than hinder you.

Finally, remember that Cucumber is not a testing tool. It is a tool for capturing a common understanding on how a system should work. A tool that allows you, but don't require you, to automate the verification of the behaviour of your system if you find it useful.